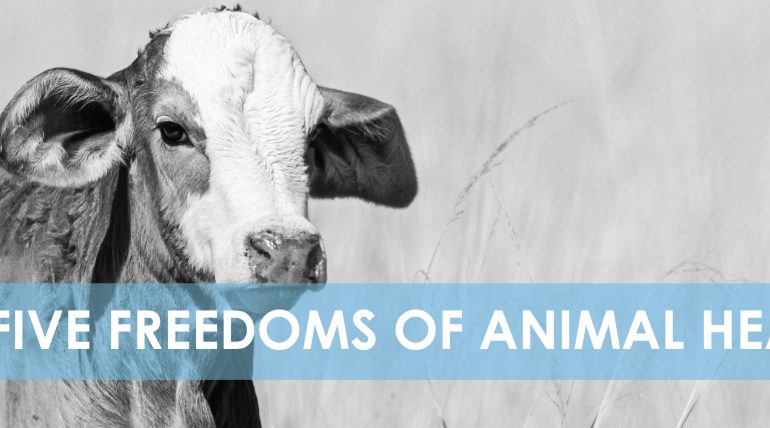 The Five Freedoms of Animal Welfare

The Five Freedoms of Animal Welfare

It is a well-known fact that production animals produce better in a stress-free environment. This is true for all living organisms in every production system. Animals and humans get diseased as soon as there are any signs of stress. Consequently, production drops. Here we discuss the five freedoms of animal welfare.

The question is: “How can we produce animal protein that is crucial for the wellbeing of humans? Without increasing the stress levels of the animals?”

Animal welfare is a topic that is not often talked about at farmer level. It is often ignored instead of being tackled proactively. Furthermore, the consumer is demanding that farmers take animal welfare and the environment seriously when producing food. The problem is that this issue is not addressed properly. Good nutrient dense food is the next step. It has a positive effect on the human health. In reality, consumers are already demanding certain Brix values of their fruit and vegetables.

We have to change farming practices and take the whole value chain into consideration. Farming practices should improve soil biology and the effects on the environment. It should improve the quality of the feed and food we produce. We need audited animal production systems that specifically look at the five freedom principles of animal welfare. We should monitor the effect of produced food on human health. Does it improve human health and resilience?  Are humans more disease prone? Certain chemical residues in food contain known carcinogens and endocrine disruptors.

It is crucially important that we change proactively instead of being blinded. We are so entrenched in our ways that we cannot comprehend the effects on the environment. We impact the health of our production animals and eventually the health of humans.

What are the five freedoms of animal welfare?

1. Freedom from hunger, thirst and malnutrition

It is unthinkable that farmers would not feed their animals or not give them water to drink.

However, it is about more than that. We should always provide toxin free feed. Toxins are probably one of the main causes of disease and often go unnoticed. It starts with the maize purchase. Don’t think you are buying a bargain if the maize is so much cheaper than commercial maize prices. It will come back to haunt you. The result: Disease or production losses, lower conception rates, or reduced daily weight gains.

For how long will we be able to feed Antibiotic growth promoters (AGP)? They have been banned in Europe and in some African countries already. Should we not breed animals robust enough to withstand the pathogenic challenges they are exposed to on farms? Has COVID19 shown us how fickle our food production and food distribution processes really are? What will happen if one of the large chicken or bacon suppliers close because of a virus? We have had our first scare last year already with Listeria.

The problem with any pandemic or disease outbreak is misinformation. Social media can so easily enable the distribution of misinformation. Important: What is not said rather than what is said.

The other side effect of AGP is the pathogen resistance to antibiotics. We must produce animals that can produce regardless of the pathogenic load on the farm. This includes bacteria, internal or external parasites. Farmers should use management systems which limit exposure.

“Water is the fundamental nutrient without which animals soon die. It is taken for granted and, therefore, often neglected”. In the words of Rick Kleyn in his book Chicken nutrition.

We must give our animals clean, fresh drinking water. There is so much at stake in any animal production system. We cannot afford to mess it up with contaminated water that might cause diseases within the herd. Only one water source, if contaminated, risks infecting your whole herd.

2.  Freedom from physical and thermal discomfort

This once again is an obvious statement. Why would any producer want to cause a state of discomfort for his animals? It affects the farmer’s production and income. What is not obvious to the consumer is that animals are not as sensitive to temperature as humans are. Free range or pasture raised animals are normally more robust. Or could it be that the environment is just more animal friendly for the pasture raised animal than factory farmed animals? That would beg the question, why spend so much money in trying to control the environment?  Pasture raised animals don’t need to be pampered to such an extent as industrial farmed animals. Is the cost of industrialisation worth it?

Farm with Nature not against her.

It is important to retain trees and natural shade for your animals. They can then move out of direct sunlight. They must have access to direct sunlight too to stand or forage in the sun.

3.  Freedom from pain, injury, and disease

It is very seldom that a producer deliberately causes pain or injury to his animals. What this refers to though is the handling facilities should not cause pain or injury. A mercy killing is necessary if the animal has chronic pain or cannot be helped anymore. Consider the welfare of the animal in mercy killing over the potential loss of money.

Prevention is better than cure

The veterinary consultant plays a crucial role on the farm in freedom from disease. You cannot think of animal welfare without a resident vet who inspects your animals at least twice a year.  The farmer and the vet should discuss disease prevention. Prevention is better than cure. This should be an all-encompassing discussion including quality feed, water, animal handling, breeding, disease tolerant animals for your specific area. Discuss vaccination programs, and what treatments should be followed if there is a disease outbreak. Antibiotic growth promotors should not be part of the disease preventative discussion. We are fooling ourselves if we believe it doesn’t cause pathogen resistance to various antibiotics.

Antibiotics are, however, part of every farmer’s tool box. Use according to the vet’s prescription. To blanket treat a herd for a disease that might affect production with antibiotics is not an option. Using vaccines or boosting the immune system of the animal is a more sustainable option.

4.  Freedom from fear and distress

Easier said than done. Farming in Africa is not for the faint hearted if we take all the predators in consideration. Controlling predators will always be a contentious issue between conservationists and farmers. Relocating programs for predators should be more coordinated across Africa. From leopards, cheetah, to wild dogs and hyena. Some countries welcome the reintroduction of predators while others feel they have too many. Because of various restrictions, rules and lack of funding, these relocations aren’t happening. A farmer is often made out to be the villain when he shoots a predator. The problem is that he has no system to support him in predator control.

As far as freedom form distress is concerned, I just want to highlight air quality.  This is often ignored, especially in baby animal enclosures. Baby animals must be kept warm – usually at a temperature higher than ambient temperature. The air circulation is critical in these rooms or facilities to ensure enough oxygen in the room. Circulated air must be clean.

This is an interesting principle as most of our production animals have been domesticated. Their genetic selection is such that they can produce or grow in a certain time frame. This enables harvesting for meat under various conditions. In the chicken industry for example, the chickens are genetically selected to grow at a certain rate. They must be kept in a specific environment to maintain that growth. Taken out of that environment the chicken will not produce and probably die. With all genetic selection, the immune systems is negatively impacted if you only select for growth and production.

The interesting questions about the five freedoms of animal welfare are:

Joe Salatin, in his book “Folks this ain’t normal” describes how he was reported to the animal welfare office. He wars reported because his ducks were swimming in a pond during winter. The charge: His animals were cold. The ducks went into the pond on their own. Wild ducks were also swimming in the same pond.

We must be very careful not to judge wrongly and in ignorance.

Farmers should consider that they can push their animals over the limit. Take any intensive reproduction system where the success rate is measured in number of pigs weaned, per sow per year. Having ewes lamb three times over a period of 24 months and the yield that has to be achieved in a dairy cow. In a TMR system, to produce a calve yearly and average over a certain yield of liters per day to cover costs.

We are still working with living systems and they are wicked. Life happens and things do go wrong. It can go wrong with with feed, water or other environmental factors such as heat. We must not run our herds on a knife edge. The production cost is just not worth it. We have to build more resilient management systems with better control of input costs.

The broiler industry must be nearly sterile to produce their results.  This is not for the biosecurity of the humans, but rather for the broilers. Fatalities are high when there is a disease outbreak. There is no more robustness in our animal production systems. Cryptosporidium, for example, has been devastating for both beef and sheep farmers.

Animal rights activists and vegans only take the animal into account. Everything revolves around the animal. The financial aspect of farming does not feature in the argument. Some controversial animal rights activists vandalised farms and cut electricity cables in the past. This resulted in a malfunction of ventilation and 700 pigs died. This is not fighting for animal rights. These are criminal acts that should be dealt with as such.

However, the farmer cannot ignore animal welfare and think he will achieve optimal production. Think of how strict the various industrial farming setups are. They take animal welfare into consideration like group housing in the pig industry.

The farmer must make money. He cannot do it at the cost of animal welfare. He must be aware of any short coming with his management practices.

Consumer pressure to produce animal protein ethically is mounting. More farmers are starting to tell their stories about how they treat their animals. They do not use antibiotics or harmful chemicals to control internal and external parasites.

Ultimately, we must start looking at our animal production systems where biology plays a major role in all aspects. We cannot reduce our farming systems to only mechanical and chemical processes. This is just too simplistic and the production costs will escalate. The result of management systems where the biological services are enhanced, is more control of input costs. Undefined advantages like animal health and soil health reduce the production costs even further.

Ultimately, animal protein is essential to human wellbeing. We are omnivores. Therefor, we as consumers, have a choice in our buying power. We can choose how the animals that we eat, are raised. This is applicable in all aspects of animal protein from dairy, poultry and various meat products. Finally, keep the five freedoms of animal welfare in mind in animal production.

Get involved in the conversation. Join our Facebook Group: Heal the Land; Heal the People